The Legend of the Gold of Babylon

The Legend of the Gold of Babylon

The Gold of Babylon

The Legend of the Babylonian Gold[1]

The Legend of the Gold of Babylon (バビロンの黄金伝説, Babiron no Ōgon Densetsu?) is the 3rd Lupin the 3rd movie released on July 13, 1985. It was produced by Tokyo Movie Shinsha, Nippon TV and Yomiuri Telecasting Corporation, directed by Seijun Suzuki and Shigetsugu Yoshida, and written by Atsushi Yamatoya and Yoshio Urasawa.

Lupin searches for a gigantic hoard of hidden treasure originating in ancient Babylon. With the help of his usual team, a set of stone tablets, and a drunken old woman by the name of Rosetta, Lupin competes against mafiosos Marciano and Kowalski who are also set on finding the lost Babylonian treasure. Complicating matters is Inspector Zenigata, who has been roped into judging the "Miss ICPO Beauty Contest" and must now drag a group of nominees around with him, all eager to prove themselves as agents. Will Lupin get to the treasure before Marciano and Kowalski lay their grubby hands on it? Will the trail of talent following Zenigata interfere with him finally apprehending Lupin?!

This film is the only Lupin film where he wears the pink jacket from the third TV series. When TMS decided the time was right to make a third Lupin movie, they first chose Mamoru Oshii as director, based on the recommendation from Hayao Miyazaki. During the pre-production stage, however, the company considered Oshii's plan as too avant-garde, and replaced him with Seijun Suzuki and Shigetsugu Yoshida both who were working at Part III at the time; the former wrote Part III Episode 13. Even though the idea was scrapped, some artwork by Yoshitaka Amano and interviews of the original version were made.

Mamaro Oshii's original idea for this movie was for the story to have no protagonist at all. Lupin III wouldn't be seen at all throughout the movie. His other idea involved an architect building the Tower of Babel in the heart of Tokyo and would have committed suicide upon completion. Lupin’s goal would have been to steal a fossil of an angel. Another idea was that an older, depressed Lupin accidentally caused a nuclear explosion in Tokyo, then realized he was a fictional character and attempted to enter the real world.

The original writer Yoshio Urasawa also left with Atsushi Yamatoya finishing the script. Due to the production change, some of the Part III staff worked on both the movie and were still finishing off the series such as Yuzo Aoki.

Marciano's name is transcribed as Marchiano, to ensure the correct pronunciation of the Italian surname in Spanish writing - otherwise, it may be mispronounced [mar-ˈθja-no], meaning "an inhabitant of the planet Mars", instead of [mar-ˈtʃja-no], as in the surname of boxer Rocky Marciano. This was based on the Japanese transliteration Maruchiāno.

The film has a mixed reception among people with fans from the US are more critical.

Helen McCarthy when she wrote for Anime UK praised the film and found it to be "one of Lupin's strongest ever outings" and thought that "anyone who doesn't love it is hard to please indeed!". She had noted the references to the Indiana Jones saga, Close Encounters of the Third Kind, Fortean theory and nursery rhymes. She found it hard to say whether it was the sophistication of the script or the visual inventiveness that she had found stronger but considered it a tribute to Monkey Punch in terms of its flexibility and longevity. This review was also used in the synopsis of its UK VHS release. [4]

Mike Toole of Anime News Network stated that when he first watched The Legend of the Gold of Babylon in the 1990s, he hated it, having only known Lupin as the "smooth, gallant antihero" from The Castle of Cagliostro and The Fuma Conspiracy. Whereas Legend of the Gold of Babylons version of Lupin is closer to Monkey Punch's original "rough, drunken, lecherous crook." However, a decade later, he stated that the film "goes down much smoother" having been acquainted with Suzuki's other work, the director being known for his bizarre and oddly-structured films.

Paul Jensen, also of Anime News Network, felt that the film's troubled production shows in the final product. He believes that its convoluted plot is a result of all the staff changes, with the drama, comedy and action scenes competing for the audiences' attention rather than complementing each other. Jensen stated that the movie feels like a "few unrelated stories edited together than a single, unified film."

Reed Nelson who was later involved with the Discotek release however did not consider the movie to be worth watching. He considered the Miss ICPO Beauty Pageant plot to have dated stereotypes and referencing another fan by saying that it felt "more like a dragged-out Third Series episode than a movie". [1]

It was released on subtitled VHS and LaserDisc in North America by AnimEigo in 1994 under the title "Rupan III: Legend of the Gold of Babylon", due to copyright concerns regarding the Arsène Lupin name at the time. The release also had various translation mistakes regarding the credits to the staff such as Atsushi Yamatoya credited under "Oowaya Chiku", Yuzo Aoki as "Taizoo Aoki" and Seijun Suzuki as "Kiyoshi Suzuki". A year later, it was released in the UK by Western Connection as a limited release and was released with the Lupin III name in tact. Both VHS releases had different translators with Shin Kurokawa and Michael House for the US and anime fan Jonathan Clements for the UK.

In 2005, Discotek Media acquired it for a DVD release, however, it was later cancelled due to both North America's declining anime industry and the rights for the movie had made it more expensive due to Seijun Suzuki's involvement. In August 2017, Discotek announced that they would release The Legend of the Gold of Babylon on DVD and Blu-ray. It has a new English dub featuring the same cast from Pioneer Entertainment's dub of Lupin the 3rd Part 2 with the exception of Zenigata. It was later announced that a Blu-ray would be released on November 27, 2018, while the DVD version was released on December 18, 2018.

The Italian version was censored when it was dubbed and the dialogue was rewritten. While the DVD is uncut, there are segments where it switches between the Italian dub and the Japanese original. The following was cut from the dub: 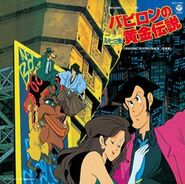 Promo Poster, Lupin wears a red jacket rather than pink. 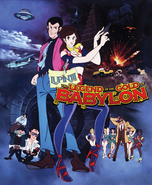