Return of the Magician

Return of the Magician

The Return of Pycal (Discotek title)

Lupin the 3rd: The Revenge of Pycal (Discotek announcement title)[1]

TMS Entertainment
Return of the Magician (生きていた魔術師, Ikiteita Majutsushi?) is the second Lupin the 3rd OVA released on April 3, 2002.

Lupin and his partners in crime gather in Greece to acquire the seven mysterious "Celestial Crystals." He targets one being kept in a Mediterranean mansion and finds himself up against not just his rival Inspector Zenigata, but a second one as well! And one of them is far more violent than usual... This vicious version of Zenigata sheds his disguise to reveal himself: Pycal, the man once called "The Magician." He has somehow escaped his deadly fate and has a new goal: to collect the Celestial Crystals for himself. When gathered, the crystals give the bearer a unique and immense power over others. Can Lupin and the others stop Pycal and save the world from his control? 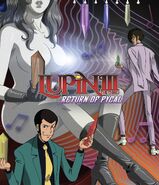