Rebecca Rossellini is a character introduced in Lupin the 3rd Part 4.

Rebecca is a young Italian entrepreneur, but her impulsiveness and thirst for excitement drove her into a vast number of different undertakings. In her young life she has pursued a number of professions, including an actress, a model and film making, all of them ultimatively granting her no satisfaction.

When she was a teenager, she had a relationship with Wataru Uraga, a brilliant Japanese student residing in San Marino. Unbeknownst to Rebecca at the time, Uraga had discovered how to implant his personality into other people's dreams, called Il Sogno Italiano ("The Italian Dream").

She later accepted Lupin III's marriage proposal and they manipulated each other in order to steal the Royal Crown of Libertas for their own reasons. Rebecca wanted the crown for the thrill of the theft itself and has shown herself to be physically and mentally able to run loops around Lupin III even though he does eventually win their confrontation - which she willingly admits.

Halfway through the series, Rebecca admits she hadn't even submitted the marriage documents, making her marriage with Lupin invalid. Even then, it doesn't stop Lupin from protecting the woman he considered his wife.

Among the "chosen apostles" that Leonardo da Vinci tested through the use of the Italian Dream, Rebecca was the only one who failed, making da Vinci inhabit her mind and slowly use her memories to build his kingdom one by one. In the very end of the episode, as Lupin prepares to leave Italy once and for all because the people blamed him for sabotaging the minds of the nation, Rebecca begs Lupin to allow her to use the Mrs. Lupin name, before ripping their marriage documents.

Her fashion doesn't change much even when she's thieving, as the most drastic change to her appearance when she goes out as a thief is just a pair of glasses.

On the surface, Rebecca is merely a cheerful yet somewhat bratty celebrity who appears in multiple magazines, movies, advertisements and vast amounts of other media in Italy. For everyone who have heard of her before, she is a typical mega superstar who loves chasing thrills.

But only individuals like her butler Robson Zuccoli and Lupin III, however, know how far she will go when chasing thrills, even if it meant being a thief as her double life. When Lupin during the first supper said they stole the Mona Lisa, she said she was jealous because it was thrilling and interesting. For an entire episode (Part 4 Episode 22) she even went alone to capture Lupin and be hers for the night, sending him advance notices along the way.

Lupin III, Jigen, Goemon, Fujiko and Rebecca from Part 4 in the promotional picture to celebrate Christmas

Lupin III, Rebecca, Fujiko, Goemon and Jigen on the insert picture of the 4th Blu-ray of Part 4 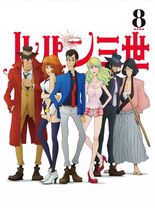 Lupin III, Rebecca, Fujiko, Goemon and Jigen on the insert picture of the 8th Blu-ray of Part 4