Lupin VS the Clone

Unknown, implied to be ancient Babylonian

Not to be confused with Kyosuke Mamo.

Mamo is the main antagonist of the movie Lupin VS the Clone. He also appears briefly in one scene of the 2014 OVA, Daisuke Jigen's Gravestone.

Mamo is known as an ancient being of immense knowledge and wealth, bent on discovering the secret of eternal life.

According to his speech to Lupin III, Fujiko Mine, and Daisuke Jigen, Mamo was born 10,000 years ago in what appears to be ancient Babylon. He studied many different forms of ancient science and achieved a sort of enlightenment, discovering a method to attain immortality through cloning his body and passing his consciousness through each one, while putting his original self in the Ringer's Solution, effectively pickling it. As he continued cloning himself, he met many people from world history and saw the most potential in causing wars, bringing about many tragedies in humankind's existence.

At some point in time, Mamo adopted the alias of "Howard Lockwood": the world's richest man, in order to cover up many of his activities, as well as making his actual name into an acronym standing for "Mega Amalgamated Multinational Operations". Using the vast wealth and resources he had accumulated throughout his years, Mamo plotted to annihilate all life on earth and transform the planet into his own utopia. populated by those he had hand picked and saw fit. For example, Fujiko, and clones of various people, including a clone of Lupin himself, who he had created to steal a mandrake root from Dracula's castle, since the successive clones of him were decaying and he needed it as a medical solution to hinder effects.

Unfortunately, the clone was hanged by Romanian authorities. Some time later, he blackmailed the President and the Secretary General for data on biochemistry, cytology and biogenetics; it's not known if he was successful, as most of the information the US Government kept was classified. Mamo then got the real Lupin to steal the Philosopher's Stone for him through Fujiko. He then had Lupin and his gang ambushed by a helicopter, murdering several innocent bystanders, and then sent a truck after them, and Flinch in a biplane.

After several threats and mind games played on the gang, he sent Fujiko out. He had Lupin kidnapped and offered him eternal life as a reward for stealing the stone. He was somewhat put off by Lupin's "we all die someday" mentality, but gave him time to consider it. While Lupin ran loose through the fortress, Mamo wooed Fujiko with extinct butterflies he brought back from the dead, in exchange for her immortality, while expressing his doubts that Lupin really deserved eternal life. He was further dissuaded from it when Lupin hid the Stone where Mamo would never find it. Fujiko went off to persuade Lupin to choose immortality, but as soon as she came back with the thief, the two of them were making out on an elevator floor. He denied Lupin immortality and once more offered it to Fujiko, but she refused, on the grounds that she doesn't want to be young and beautiful forever if it means seeing Lupin grow old. In a jealous rage, Mamo cuffed Lupin to a crucifix-shaped operating table and probed his brain to show Fujiko why he doesn't deserve immortality. To his shock, he found that Lupin's subconscious was just a void and that he didn't dream. He couldn't understand why Fujiko would prefer a man who wasn't bound by ambition.

Soon, Jigen came to Lupin's rescue, and Mamo tried to kill Fujiko to prevent her from leaving. Jigen seemingly killed him. A short time later, he sent one of his incarnations to gaslight Lupin into believing he was the clone and took Fujiko back for himself. His attempt to blackmail the US government went awry, so he quickly changed plans and tried to start a war so that he and Fujiko would repopulate the planet. This, too, was foiled when Lupin destroyed his missiles, and as a last desperate resort Mamo captured Fujiko yet again. Lupin followed him and Mamo, threatened, tried to kill him with lasers.

In a gloating mood, Mamo admitted that Lupin was his own original self and that the clone was hanged, before getting immolated by his own lasers. This, of course, was just another of his own copies. He showed his true self, a giant brain in a jar, and told Lupin and Fujiko that he was off to a planet where he planned to achieve godhood. He then set off into space, unable to see that Lupin planted an explosive on his container, and once he was out in space, the shuttle detonated, killing him for good, and prompting Lupin to magnanimously remind him that all things must come to an end.

At first glance Mamo appears to be a shriveled imp but throughout the course of the film, it is revealed that his elfish body is merely part of a series of degenerate clones derived from what little remains of the original Mamo.

Mamo is a cold, calculating and a manipulative creature. He believes himself to be a highbrow creature. However, with all his power and knowledge, Mamo has a fragile ego. He tricks Lupin into thinking he's a clone out of jealousy over Fujiko and the attention she gives Lupin, and sets off an earthquake when Lupin challenges him to make a miracle work. He offers Lupin eternal life, but reacts with dudgeon when he finds out how lecherous and unpredictable the thief is and probes his brain as proof. His older clone reflects on the fact that he is "a copy of a copy", but doesn't regret being a clone, as "everything is for immortality". 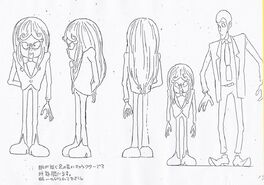 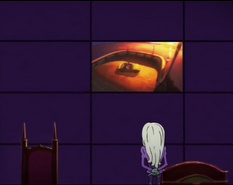