After reruns made the first series a fan favorite and following the success of the live action movie Strange Psychokinetic Strategy, the second TV series was produced and set five years after the first series. Two movies were released during the original broadcast: The Mystery of Mamo and The Castle of Cagliostro. It also crossed over with The Rose of Versalles, an anime series by the same studio which ran contemporaneaously with season 4.

Donning a red jacket, Lupin reunited with Jigen, Goemon, and Fujiko to resume their thieving ways. This series retained the comic tone Miyazaki and Takahata brought to the close of the first series. While the darker tones of the manga were left out, many of the manga stories were adapted into episodes.

Not much is known regarding the production of the Part II series. Tokyo Movie, the company that brought Part I was closed down in 1976 and was restructured as Tokyo Movie Shinsha (Tokyo Movie New Company) [1]. Lupin the Third Part II was their first project that they produced with the help of outsourced studios such as Oh Production, Top Craft, and other currently unknown studios. Artland was credited and started from 1978 however it is currently unknown what episodes they had animated. [2]

TMS also set up the studio Telecom Animation Film during this time originally for overseas work however they got their first work on the series.

According to Seiji Takahashi who was studio producer of Nippon Television, the series was produced for a high school audience (12-18). [3]

Produced by the Japanese animation studio Tokyo Movie Shinsha, the series contains 155 episodes which aired between October 3, 1977 and October 6, 1980 on the Japanese television network, Nippon Television. Two feature films, The Mystery of Mamo and The Castle of Cagliostro, were released in theaters during the original broadcast run of the series.

After Japan, the series was aired in Italy in 1981 under the title Le Nuove Avventure di Lupin III (The New Adventures of Lupin III). Later France aired the series in 1985 with only 52 episodes being dubbed and Spain aired all 155 episodes in 1991.

The episodes, Wings of Death - Albatross and Farewell My Beloved Lupin, both directed by Hayao Miyazaki, were the first episodes of Red Jacket to appear in North America. They were dubbed by Streamline Pictures and distributed by Orion Home Video on VHS in 1993 and 1994, both under the title of "Lupin III: Tales of The Wolf". Both episodes were later bundled together on a single tape titled Lupin III's Greatest Capers. Twenty-six episodes of Geneon Entertainment's English adaptation of the anime aired on Adult Swim starting on Monday, January 13, 2003 (January 14, technically, since it premiered at midnight). Episodes 1–27 were broadcast on the channel, with the exception of episode 3. 79 episodes were dubbed in English before Geneon folded and are available on DVD.

In 2009, the episodes were restored from the 16mm masters correcting the color as well as removing the grain, dust and scratches. They are also uncropped unlike previous DVD releases and the Geneon versions. These were the basis for the Blu-ray releases in Japan, the Yamato Video releases in Italy (with different masters, subtitle-less for episodes 72 and 89) and the Discotek releases in the US.

For a list of home video releases see here.

The series has the distinction of being the first anime series to be broadcast in stereo starting with episode 99 and intermittently to the end.

The US order was made by Pioneer on the grounds of avoiding Hitler's Legacy until a later date and TMS kept the order for streaming services. The Italian order is as of the airings on Mediaset channels that are different than the DVDs that follow the Japanese order. 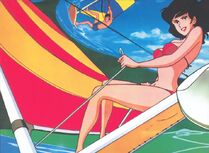 Promotional image of Lupin and Fujiko.

Group shot of the main cast. 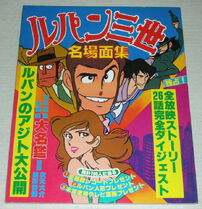 Red Jacket section of a pamphlet from TMS. This was handed out to potential foreign distributors.

Artwork showcasing various characters that appeared in Part II. This appeared on both the Japanese and Italian DVD boxsets.

Promotional wallpaper for the North American release of the Pioneer dub. 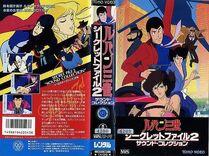 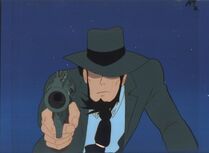 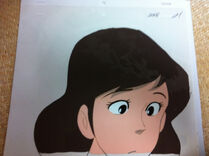 Cover from the Japanese Lupin the Third second tv DVD Box, this is from Disc 11 of the box set.

Promotional Artwork by TMS, circa 2000s.
Add a photo to this gallery

Outside of Japan, the Red Jacket nickname was easier on the grounds that Lupin wore a red jacket throughout the series.

Retrieved from "https://lupin.fandom.com/wiki/Lupin_the_Third_Part_II?oldid=11913"
Community content is available under CC-BY-SA unless otherwise noted.