Lupin the 3rd Part III is the third animated television based on the Lupin III manga series written and illustrated by Monkey Punch. It was produced by TMS Entertainment, and broadcasted by Yomiuri Television (the network which aired the Lupin the 3rd Part 1) between March 3, 1984 and December 25, 1985. It is also known as the Pink Jacket series, after the colour of Lupin's jacket.

During the series run, The Legend of the Gold of Babylon was produced at the same time with the same staff. It is also the first series not to have a typed title card.

Until recently, the series was only available in Japan and Italy receiving DVD releases and for Japan, Blu-ray. It was also aired in Spain. In the US, the entire series is currently available to stream via Crunchyroll and received a Blu-ray boxset in 2021.

Yuzo Aoki had proposed three character designs for Lupin in this series. A hard Lupin, a soft Lupin and a comical Lupin. His aim was to be in between the gritty style of Masaaki Osumi and the family friendly tone of Isao Takahata and Hayao Miyazaki from Lupin the 3rd Part 1.[1]

The initial character designs of the Pink Jacket Series were much more grounded and gritty, bearing a greater resemblance to Monkey Punch's original sketches. Yuzo Aoki had studied the manga and wanted to do his take on the character designs rather than being based off the previous anime.[2][3][4]Lupin and Goemon were given their traditional cleft chins, Jigen's face was more elongated and unlike other appearances his eyes were more visible, and Fujiko was made to look much more delicate and less voluptuous. Then the animation started becoming more loose yet kept the chin for Lupin, Jigen's design reverted back to covering his eyes and Fujiko was redesigned. This change was due to that Aoki wanted to simplify the character designs.[5]

Towards the later half of the series, the production team decided to drop the gritty appearance of the designs and headed towards a more cartoonish nature more closer to Western animation to simplify them even further. This was to get a "simple yet satisfying result".[6] Lupin was redesigned and its design was the same as the Legend of the Gold of Babylon with a rounded chin while Fujiko had two redesigns in terms of her face and her hair.

Due to diverse animation teams as well as a decision to have three character designs for Lupin, the designs and overall look of the show tended to greatly differ from episode to episode and even within the same episode, making the the production look extremely inconsistent. It was an intentional decision as Aoki wanted to express creativity.[7]

While the series has 50 episodes, TMS Entertainment internally divided the series into four cours or two double cours. The wiki splits it into two seasons due to the different opening and eye catches. The original air date for the last episode is disputed but is officially accepted as airing on December 25, 1985.

Relationship to the Manga

When the series was originally dubbed into Italian, the series was censored with some episodes edited to the point of not making sense. This was due to that Mediaset had the rights to the series and while much of the content was not suitable for children such as nudity and heavy violence, some decisions affected the plotlines for no given reason. Romantic gestures were also censored or removed. The DVDs are bilingual switching to Japanese during the cut scenes. This dub also suffered from PAL Speedup resorting to higher pitched and sped up music with Sexy Adventure being the most obvious.

On April 2, 2021, Yamato Video had announced a new uncut Italian dub for the Blu-ray with previews of Episode 14 and Episode 18.[9] The dub was released on June 16, 2021 on Amazon Prime[10] and a majority of the series was redubbed with episodes receiving new names. Enzo Consoli was kept as the voice of Koichi Zenigata despite have passed away using archive material from the original dub with Paolo Siervo replacing him on the cut scenes. Selected lines from the original dub were also retained. 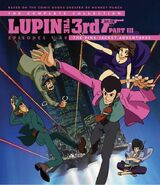