View source
watch 01:36
We're Getting Mutants in the MCU - The Loop
Do you like this video?
Play Sound

Lupin the 3rd Part 4 (ルパン三世 PART4, Rupan Sansei PART4?) is the fourth animated television based on the Lupin III manga series written and illustrated by Monkey Punch. It was produced by TMS Entertainment, and animated by Telecom Animation Film. It was broadcasted by Nippon TV between October 1, 2015 and March 17, 2016. It is also known as the Blue Jacket series, after the colour of Lupin's jacket. A 90-minute TV special titled "Italian Game", continuing the story of the series, aired in Japan on January 8, 2016 after the midpoint of the series.

The series was announced at Mipcom in Cannes, France in October 2014 originally set to be broadcast in Spring 2015 in Italy. TMS Entertainment had travelled to Italy for research and set the main location in San Marino. TMS had then announced a licensing deal with Mediaset to air the series, the original plan was to air the series on Boing however it aired on Italia 1 on August 30, 2015.[1] Telecom Animation Film produced the series, with franchise veteran Kazuhide Tomonaga serving as chief director and Yoichiro Yane directing with scripts by Yūya Takahashi. Yuji Ohno returned in his role as series composer. Tomonaga's aim was to mix the opposing elements of the franchise and combine them into a series that is both hardboiled and comical, realistic and fantastical.[2]

Despite being the last to air and to be dubbed, the International version that aired in the US was the first to be made. The Italian version that was the first to be aired then had Italian language errors fixed at the request of Mediaset who broadcasted the series in Italy. The Japanese version was made last featuring a new opening and ending as well as music by Yuji Ohno. There were also animation changes throughout the series changing poses and the timing, fixing some off model animation, and some elements meaning that the animation would no longer sync to the International version.

Part 4 is the only series that was first broadcasting outside Japan before being aired on the local television company. The first 4 episodes were broadcasted on August 15th, 2015 in Italia and the first episode was broadcasting on October 1st, 2015 in Japan.

The episodes "Venice of the Dead" and "Non-Stop Rendezvous" only aired in Italy and in the USA. In Japan, they were released as bonus content on Vol. 4 and Vol. 8 respectively of the DVD and Blu-Ray. In streaming service, they are repertored as Episode 25 and 26.

In late December of 2015, a 90-minute TV special titled "Italian Game" was announced for the following month. It aired in Japan on January 8, 2016.

As credited in the Japanese opening:

The score differs between the Japanese, Italian and International releases.

Yuji Ohno returned as the series composer for the Japanese release. The music is performed by his jazz group, You & the Explosion Band. The Japanese opening, "Theme from Lupin III 2015", is a new arrangement of the classic theme that heavily features mandolin instrumentation. The ending theme, "Say It, Or I Won't Give You My Love" (ちゃんと言わなきゃ愛さない Chanto Iwanakya Aisanai) is sung by Sayuri Ishikawa. The lyrics are written by Tsunku. It was released as a single with additional tracks in Japan on October 1, 2015.[3]

The Italian release initially aired with a more upbeat opening theme titled "Lupin, un ladro in vacanza" (Italian: Lupin, a thief on holiday) performed by the rapper Moreno, featuring the singer Giorgio Vanni. It gained notoriety among viewers, some of whom in fact petitioned to prevent its airing.[4] Outside of the opening and credits, the music was done by jazz group papik that was used in all international releases.

In early December, it was announced that the new songs "U belong to me" by jazz singer meg and "Don't Leave Me" by SWEEP will feature as the opening and ending themes for all international releases. Both songs feature work by the funk band Osaka Monaurail. Accompanied by new animation, the new OP and ED were intended to replace the Italian opening and ending as well however it did not happen. Both songs featured full-length English lyrics and was released on December 16, 2015.[5] The songs were used on the US broadcast for episodes 14 to 26 as papik had done the opening and endings songs for episodes 1 to 13. 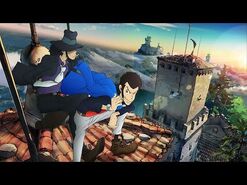 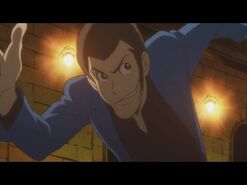 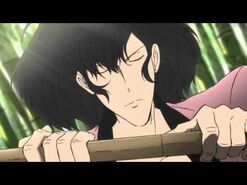