Lupin III vs. Detective Conan (ルパン三世VS名探偵コナン Rupan Sansei Vāsasu Meitantei Konan) is a crossover television special between the Lupin III and Detective Conan franchise. It was broadcast on Nippon TV on March 27, 2009. It is the only Lupin TV Special not to be numbered.

Queen Sakura, sovereign of the European kingdom of Vespania, is killed while out hunting. All indications suggest that she was accidentally shot by her son, Prince Gill, who immediately commits suicide, overcome by guilt. The title of heir to the throne of Vespania passes to Princess Mira, a girl who rejects the throne because she thinks that she's not the rightful heir. The coronation ceremony is threatened by a growing popular movement that believes Princess Mira is unfit to govern. Duke Keith, the chief of Commons, makes Jigen, former trainer of the regular army, a personal guard of the princess.

Simultaneously, Lupin reaches Vespania; he and Jigen plan to get their hands on the crown for the Queens of the Realm.

To increase the princess' popularity, a trip around Japan is organized. A festival is held at the Grand Hotel West City Tama. Kogoro Mouri and Conan Edogawa attend. At the party, Conan exposes an attempt to poison the princess. The princess wants nothing more than to escape from her condition, so in the confusion that follows, she sneaks away. Conan notices this, and follows her.

She meets Ran Mouri, who is returning from evening classes. She notes a resemblance in their appearance, and decides to trade places with her. Ran, dressed as the princess, goes back to the hotel and explains what happened. Duke Keith, to avoid a diplomatic incident with Japan, forces Ran to continue to play the role of Mira.

The princess has now been collected by Fujiko, who knows her identity and offers to take her around Japan. Conan tracks the princess and chases the pair on his skateboard. Fujiko loses him and disappears. Meanwhile, hidden beneath the kingdom is a mineral that thanks to its "complete stealth powers" may be totally invisible to radar. Using dowsing rods, Lupin has located the mineral.

Duke Keith breaks his promise to return Ran after a press conference at the airport, and brings her to Vespania. Conan, who noticed what Duke Keith was doing, boards the plane, and is saved from hypothermia by Duke Keith.

The princess Mira has since been reported to be back in Vespania. Lupin learns how the princess's character was transformed into a cynical and selfish one due to her unhappiness with her status as princess and her grief due to the death of her mother and brother. It turns out that Fujiko was hired by Duke Keith to remove the princess from court life to make her feel, at least for a while, the typical teenage experience. After meeting with Ran and Kogoro, Conan begins to investigate the murder of the Queen, with the involuntary help of Jigen. Lupin, helped by Goemon, has entered the vault of the building, and finds out that the crown has been stolen by Fujiko. He is forced to give up and flee the building when it is surrounded by police after an alarm sounds.

Mira, after visiting the place where her brother and mother died, decides to assume her duties as future queen, and agrees to return to the palace. Conan tries to put Kogoro to sleep with a tranquilizer needle, but fails to hit Kogoro (who is actually Lupin in disguise), and hits Zenigata instead. Zenigata quickly wakes up after a few seconds. Lupin reveals his secret identity to Conan, and helps resolve the case by pretending to be the true Sleeping Kogoro. Together they reveal the truth: the murder of the queen is the work of the Prime Minister of Vespania. The Prime Minister had also killed the prince, making the case seem to be a murder-suicide. His plan was to ascend to the throne himself, and to get rich selling the ore the Queen had forbidden to sell due to its potential to be used in war, and her love for nature, which would have been destroyed if excessive mining had taken place.

Thanks to Conan and Lupin, the culprit was caught, and Princess Mira becomes the new queen of Vespania. Ran and Kogoro are welcomed as saviors of the kingdom, and Zenigata yearns for yet another fight with Lupin. The final scene shows Conan being taken in a car by the Japanese. The people in the car are actually Lupin and his gang, who have decided to help Conan return to Japan due to Conan's lack of a passport. Lupin explains that he returned to honor a promise he made to Queen Sakura. He knows the true identity of the young detective, calling Conan Shinichi Kudou, while Conan promises them that if one day they cross paths again, he will definitely arrest them all.

Despite that the English dub is currently unavailable in English speaking countries, J-LOD who is connected to the Japanese government and involved with exporting Japanese content overseas as listed the English dub as complete. According to J-LOD, the dub was completed in 2020 and was made to gather an interest to both series in South Africa.[1]

A manga adaptation of the special was published in the magazine Weekly Shōnen Sunday in October 2013. A theatrical film sequel titled Lupin III vs. Detective Conan: The Movie was released in Japanese cinemas on December 7, 2013. 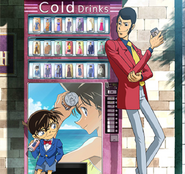