Lupin III is an arcade game developed by Taito that was released in 1980. It was the first Lupin III game.

The player has to guide Lupin (who does not resemble the thief) in a maze. The goal is to steal the money bags from the top of the screen towards the bottom while avoiding guards and guard dogs. After collecting the money bags, Lupin's movement speed deceases on how many bags that he collects. There is a move where the player can move out of the way however this deduces your score.

After the end of every stage, a cutscene where Lupin in a classic car travels towards the park and meets Fujiko. After completing three stages, she falls in love with Lupin. In the International version, Fujiko declares her love to Lupin after completing the fourth stage.

The game was ported to the Japanese home computer Fujitsu FM-7 by CPU Software, it is unknown whether they got the license from Taito to port the game however it was renamed to Lupin the 3. Due to the differences in hardware the graphics became simplified; Lupin became a club, the guards became a m character, the bags became a $ symbol that turn into a 0 when collected. Lupin can now only carry two bags instead of multiple times that slows down the character.

While the game also features cutscenes, they are different than the arcade original. There is an opening where a van goes into a bank and the cutscene of Lupin going into the building was changed to the title. The game over screen was changed from Lupin getting arrested and taken to a police van to Lupin gets shot by a guard.

The controls for the port are:

There was also a port on the Sharp MZ-80K developed by Teruo Matsuura and released in March 1981, this appeared in I/O and ran on BASIC.[1]

The original arcade version will be featured on the Taito Egret II Mini.[2] 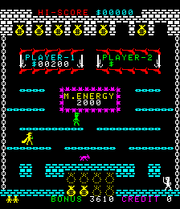 Title of the Fujitsu FM-7 port.

Gameplay from the Fujitsu FM-7 port.