Goodbye Partner is the 26th Lupin the 3rd television special. It originally aired on January 25, 2019.

Inspector Zenigata gets arrested on conspiracy charges for helping Lupin. Lupin however is after a special diamond called the Time Crystal that is also the key to control a quantum supercomputer that can be used to rule the world. While Lupin successfully steals the diamond, he gets betrayed by Jigen. Meanwhile at a Chopin Competition in London, Lisa who is the most likely to win gets kidnapped. A betrayal, a kidnapped pianist and Zenigata's arrest...

Lupin and Goemon must face Jigen in an intense battle for the fate of the Time Crystal. 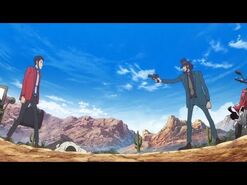