Mine Fujiko no Uso

Fujiko Mine's Lie (峰不二子の嘘, Mine Fujiko no Uso?) is the 7th Lupin the 3rd OVA released on May 31, 2019. It was released as the 4th and last anime media from the Lupin the IIIrd Universe.

A young boy called Gene holds the $500 million key that his father embezzled. The two are being targeted by the killer Bincam who attacked Gene's father, Randy. Once she escapes from Bincam who manipulates the heart of the human with the power of the curse, Fujiko and Gene get restrained. Bincam's sharp claws are ready to attack Fujiko!

The official soundtrack of the movie was originally released on May 31, 2019 in "LUPIN THE IIIRD Mine Fujiko no Uso Original Soundtrack"[3].

The opening theme is "Träumerei" (German for reverie) and the ending theme is "Innocent Deceiver", a song composed by James Shimoji and performed by Takumi Iwasky. 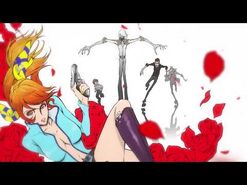 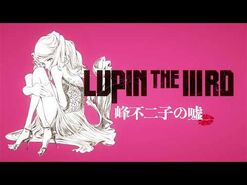