To Hell With Nostradamus

Farewell to Nostradamus (くたばれ！ノストラダムス, Kutabare! Nosutoradamusu?) is the 4th Lupin the 3rd movie released on March 31, 1995. It was produced by Tokyo Movie Shinsha and Telecom Animation Film, directed by Shunya Itō and Takeshi Shirato, and written by Hiroshi Kashiwabara and Shunya Itō.

Released ten years after The Legend of the Gold of Babylon, this marks the first appearance of Kanichi Kurita as the voice of Lupin III in the anime series' history.

Set in January 1999, a simple diamond heist leads Lupin into the machinations of a bizarre apocalyptic cult based around the prophecies of Nostradamus. The cult's plan involves kidnapping Julia, the daughter of Douglas, a wealthy American who is seeking to run in the 2000 presidential election. At stake is the lost book of Nostradamus, which Douglas holds in a high tech vault at the top of his skyscraper. Can Lupin rescue Julia, find a way into the vault, and discover the connection between the cult and the kidnapping? And what about his diamond?

Promo Poster saying Lupin the III - Lupin is Back 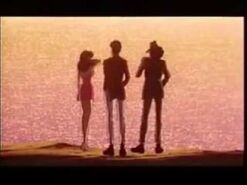