Telecom Animation Film
Daisuke Jigen's Gravestone (次元大介の墓標, Jigen Daisuke no Bohyō?) is the 5th Lupin the 3rd OVA released on June 21, 2014. It was released as the 2nd anime media from the Lupin the IIIrd Universe after The Woman Called Fujiko Mine.

By bringing her voice to West Doroa, the East Doroan singer Queen Malta hoped that she could heal the rift between the two countries. Instead, her murder on stage by an unknown assassin only served to increase the tension between the two countries. Already a country known for its incredibly low crime rate, East Doroa increases security in preparation for war--but security is nothing to the likes of super-genius thief Lupin III!

Still, when he and partner Daisuke Jigen swipe the Little Comet gemstone from an embassy in East Doroa, it's a little convenient that the police seem to know their every move. And worse, before they can even make their getaway, the pair find themselves under the crosshairs of a certain hitman--the same one that killed Queen Malta! Something's fishy, and in order to confirm his suspicions, Jigen visits the cemetery. There, he finds himself staring at his own gravestone. It's a calling card of the sniper, Yael Okuzaki... and no one targeted by him has ever escaped the grave! But why is he only after Jigen, and not Lupin? And things only get more complicated with Fujiko around!

The official soundtrack of the movie was originally released on November 26, 2014 in "LUPIN THE IIIRD Jigen Daisuke no Bohyou Original Soundtrack"[5].

The opening theme is "Träumerei" (German for reverie) and the ending theme is "Revolver Fires", a song written by Takumi Iwasaki, composed by James Shimoji and performed by Gary Stockdale.

In March 2014, it was announced that The Woman Called Fujiko Mine's animation director and character designer, Takeshi Koike, was directing an animated film that serves as a "continuation spin-off" to the TV series. Yu Kiyozono also returned to produce the film. Koike's fellow Redline creators Katsuhito Ishii and James Shimoji served as advisor and music composer respectively. The film was split into two parts and had a limited screening at the Shinjuku Wald 9 theater from June 21–27, 2014.[6] It was released on DVD and Blu-ray on November 28, 2014, with an art book included in the limited edition.[7] The 30-track soundtrack to the movie was released on December 10, 2014.[8] On December 21, 2014, Discotek Media announced their acquisition of the North American distribution rights to the film, which will be retitled Lupin the Third: Jigen's Gravestone for the American market. Their upcoming Blu-ray/DVD release of the film will include the company's first original English dub, which is being produced in cooperation with Bang Zoom! Entertainment.[9] 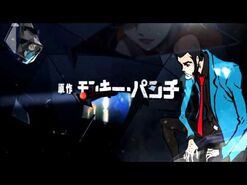 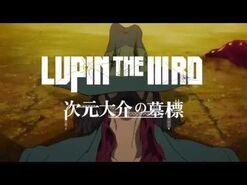 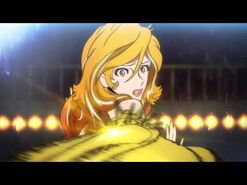