Alive
Daisuke Jigen (次元大介, Jigen Daisuke) is a smooth gunman who is most seen accompanying Lupin in his endeavors and heists. Despite Jigen disliking Lupin's lust for women, to the end he remains Lupin's loyal and reliable partner.

According to Monkey Punch, the Jigen was heavily inspired by American gangsters and loosely based on actor James Coburn's performance in The Magnificant Seven. In fact, Kiyoshi Kobayashi, the voice actor who dubs many of Coburn's performances into Japanese, was specifically selected to voice Jigen for the Lupin III animations.

While Lupin and Goemon both have unique sartorial tastes, Jigen is rather minimalist. His typical wardrobe is a grey or black suit, white or light-colored dress shirt, black tie and his ever-present grey (or black) broad-brimmed black-banded fedora; the hat ranks as his most prized possession outside of his weaponry. Even when he changes the rest of his attire he keeps his hat on and only removes it when mourning a death or during very formal occasions.

In part 2, his suit is a very grayish shade of green. During the third season of the anime, Jigen's outfit is more light-colored and his hatband has a herringbone design (similar to the original manga interpretation of the character); however, the Black look is most applied for OVA productions and TV specials. Jigen's thick hair is typically collar-length and unevenly cut. His chin curtain beard is about an inch long and also unruly.

According to the Red Jacket Series and The Woman Called Fujiko Mine, Jigen was born in the Bronx, New York. From a young age, he joined the New York mob. At some point, he relocates to Europe and joins the Italian mob, although it is unknown what the reason for this is.

While in the Italian mob, he grows close to his boss's wife, Cicciolina. This boss eventually catches wind of this and tries to kill Jigen. Cicciolina tries to stop him and accidentally kills her husband. Jigen arrives at the scene first and takes the gun from her hands, which later becomes his signature weapon and most prized possession. Seeing Jigen with a gun, the other members of the mob assume that Jigen killed their boss and goes after him. Jigen manages to escape and later takes a job with the rival Chinese mafia.

Later, after Fujiko is hired by Cicciolina to steal Jigen's Magnum, Jigen and Cicciolina meet in a church. Cicciolina points Jigen's magnum at him, but before she can shoot, Jigen kills her only to discover that her gun was not loaded and that she had never intended to kill him, but only wanted him to help her commit suicide.

Afterward, he tells Fujiko he has had enough of killing and decides to become a thief. Later in the series, he meets Lupin and the two become partners. In the episode "Revenge of the Golden Butterfly", he reveals the first job he and Lupin did together was a bank job.

Jigen appears abruptly as Lupin's right-hand man in chapter 7 of the original manga series. His origins are never explained, but he is portrayed as a hitman who would kill Lupin if the money was good. By the second manga series, however, he has become Lupin's trusted partner and friend.

In the manga, it is mentioned that Jigen has a sister.

In the anime series, Jigen is extremely loyal to Lupin and almost always partners up with him for a given mission. (This is not true in early chapters of the manga; later chapters more closely mirror the anime portrayal.)

Despite Jigen's gruff facade, he has an ironic sense of humor and genuinely enjoys participating in each caper with partners Lupin and Goemon.

His distrust of woman stems from his many failed romances (his luck with women runs from bad to worse, with love interests often betraying him or dying). He especially distrusts Fujiko and becomes irritated when Lupin goes along with one of her plans.

Among Lupin's group, Jigen is the least apprehensive at taking human life. While he considers killing women and children taboo, he is willing to put down any man who offers a threat. Also, in Lupin III vs Detective Conan, he seems to dislike it when Conan Edogawa calls him "Papa".

Jigen is also a heavy smoker, smoking about 60 cigarettes a day according to The Mystery of Mamo DVD booklet. A running joke in the series is that his cigarettes always end up bent out of shape. His favorite cigarettes seem to be either Marlboro Reds boxed (as in Falling Cherry Blossoms - The Mysterious Gang of Five - Part II and Lupin the Third Part 5) or Pall Mall (as in Mystery of Mamo); he's also occasionally seen smoking a briar pipe.

Another recurring theme is Jigen's fear of going to the dentist. In the first episode of the second series, Jigen says that his tooth throbs whenever he gets excited or jumpy. In Crisis in Tokyo, he loses his ability to shoot straight (temporarily) from being distracted by an aching cavity he refuses to have fixed. Another fear that he has is the Iron Maiden as shown in Hot Shot: This is Fujiko.

Jigen is the "big brother" of the group, and often serves as the voice of reason to Lupin's impulsiveness, as he must because of his friendship with Lupin as well as out of sheer professionalism. However, he has long since resigned himself to having to go along with the craziest of schemes. Jigen also has a rough temper and tends to become violent when someone makes an inappropriate crack. From this habit not even Lupin and Goemon are safe; though devoted to both, Jigen still has historically punched, wrestled or threatened each with violence for relatively minimal infractions, done more in a still-friends form of payback than a tie-severing injury. One example is in Castle of Cagliostro, when he wrestled Lupin to the point of the gentleman thief shouting for him to stop when he felt that Lupin was keeping secrets from him.

As mentioned, he smokes heavily; he also enjoys drinking beer and hard liquor, usually scotch. He rarely socializes and typically stays close to home. Due to his habitual distrust of women, he doesn't tend to date unless there's a strong mutual attraction.

Jigen, like the rest of the Lupin gang, is adept with disguises and can pilot virtually any motorized vehicle, including planes and tanks. He is also a tough hand-to-hand opponent, capable of knocking out an attacker with one blow.

Jigen is a master thief and The Lupin Gang's key marksman. He can perform a 0.3-second quick-draw and has an accuracy that borders on superhuman; he can shoot skeet with a handgun, explode a missile before it hits by targeting the warhead and deflect another bullet by shooting it in mid-flight. He prefers to conceal his eyes using his hat, as it gives him a more enigmatic appearance; when one or both of his eyes are seen, it is occasionally used to demonstrate surprise.

In the Red Jacket Series, it is revealed that he uses a notch of the hat to aim. However, Jigen has been seen shooting excellently without his hat, even in the very series this is mentioned in, he is seen making shots from angles where his hat's notch would be useless and even during times he is not wearing his hat at all. He is also proficient in many different firearms, such as machine guns, sniper rifles, and even a PTRS Anti-Tank Rifle.

His preferred weapon is a Smith & Wesson Model 19 revolver chambered in .357 Magnum. Jigen prefers it due to the pistol's stopping power and its dependability against misfire. He isn't as fond of Lupin's Walther P38, because it has "the recoil like a call girl".

Jigen keeps his Magnum in a fabric holster specially constructed in the back beltline of his pants. He also feels quite naked without a gun: during an enemy attack in The Plot of the Fuma Clan, Jigen was unarmed (during a wedding) yet instinctively reached back, grabbed at nothing, humorously aimed his empty hand and moved his trigger finger before realizing what he was doing. Even Lupin has mentioned he should "buy it a ring and marry it already". Jigen also carries a few rounds of special ammunition such as armor-piercing shells and his own custom made rounds to use as circumstances dictate. As he frequently travels by air, it's not been made clear how he successfully gets his weapon through airline checkpoints. One theory is that he flies unarmed and has weapons planted at all major airports, picking them up and leaving them when travel demands.

In the opening of the video game, Treasure of the Sorcerer King, Jigen assembles his pistol from composite parts and fires a shot through a door with 100% accuracy before an enemy can finish turning the doorknob. A similar situation is shown in episode 99 of the second series, "The Combat Magnum Scattered in the Wasteland." where Lupin steals Jigen's gun, takes it apart and leaves a trail of gun pieces leading to the border. Jigen is able to avoid being shot by an expert marksman, reassemble his gun and then turn around to kill his enemy.

Also to note is that, as seen in Shooting Orders!!, Jigen has a massive knowledge of guns and firearms, mainly due to him being around them so much.

In the original manga series, Jigen is simply henchman #1. His character is not developed as much as it is in the anime and he is not as loyal to Lupin and even tries to kill him on several occasions. In the anime, he and Lupin are best friends and partners. In the second manga series and beyond, Jigen becomes more like his anime counterpart.

In the manga, he and Goemon don't have much of a relationship, other than they both work for Lupin and are often trying to kill him. In the anime, however, they have a much deeper relationship. Goemon considers Jigen a fellow warrior even though he uses firearms rather than a sword, Goemon respects Jigen a great deal as the gunman has been shown to be able to hold his own against the samurai.

Though there is a moderate mutual dislike between the two, Jigen and Fujiko have been shown to get along on certain occasions, sharing a pseudo brother and sister-like relationship.

Despite having shot her father, Jigen and Karen shared a brief romance on board the submarine, Ivanoff, before Karen was killed by Keith.

Possibly his first lover and the root of his distrust of women. Before Cicciolina's murder of her husband (and as such Jigen's loss of contact with her), they shared a deep romance, and Jigen had stopped her committing suicide at least once. Jigen's magnum was previously owned by Cicciolina's husband (he had taken the weapon to frame himself for the murder).

The TokyoPop reissues of the original Lupin comics note in their preface that Jigen's appearance and temperament are based on the actor James Coburn, especially Coburn's role in The Magnificent Seven

The character was portrayed by Kunie Tanaka, in the Japan-made live-action film Lupin III: Strange Psychokinetic Strategy. He has also appeared in a Case Closed special called, Lupin III vs. Detective Conan.

Jigen has been referred to in other anime and manga such as Excel Saga. Anime historian Carl Horn has described Jigen as "the epitome of cool". 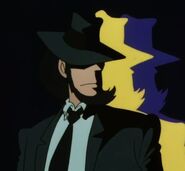 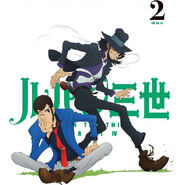 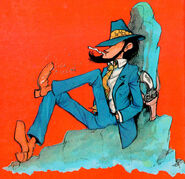 Jigen Daisuke in Lupin The Third The First

Add a photo to this gallery

Retrieved from "https://lupin.fandom.com/wiki/Daisuke_Jigen?oldid=12214"
Community content is available under CC-BY-SA unless otherwise noted.